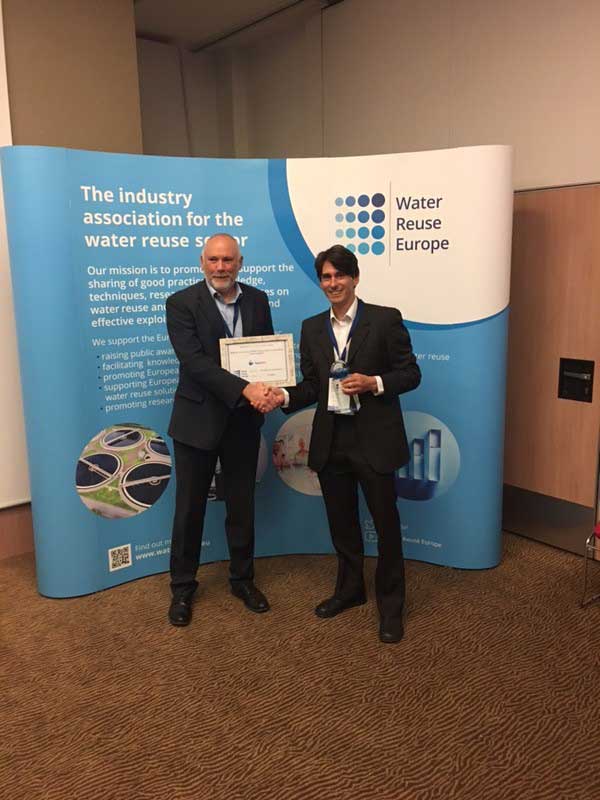 Worcester-based Aquabio Ltd – in conjunction with Bakkavor – has been awarded the inaugural Water Reuse Europe award for the Most Innovative Water Reuse Scheme at the association’s annual conference in Bruges, Belgium last week.

The award recognises Aquabio’s water reuse solution at Bakkavor’s Cucina Sano site in Boston, Lincolnshire – where Bakkavor produces Italian ready meals for Marks & Spencer – as a project at the forefront of water reuse practice in Europe.

The new installation, which became fully operational in December 2016, enables more than 80 per cent of the water used to be safely recycled.  It has also cut traffic flow to and from the site eliminating approximately 130 road tankers per week.  The plant treats up to 700,000 litres per day and up until September 2017, more than 72.35 per cent of wastewater received from the factory has been reused, a total of 123 million litres.

The judges highlighted a number of key elements of the project which resulted in it being awarded the prestigious accolade.  These included:

The scheme delivers the highest percentage of reuse of treated wastewater back to the factory of any large-scale food production site in Europe;

Steve Goodwin, Managing Director of Aquabio said : “We are absolutely delighted that the plant has been recognised as a project at the forefront of water reuse practice in Europe.  As such it is a highly successful and ground breaking industrial water reuse project.  It is setting the standards for large scale wastewater to potable water reuse within the food processing industry.  It has embraced innovative technology and know-how, met corporate sustainability objectives, saved costs, reduced resources and enhanced the profile of safe water reuse, and setting an example for others to follow.  Well done to all those involved!”

Paul Jeffrey, Chairman of Water Reuse Europe, commented: “In showcasing the best that Europe has to offer in the rapidly growing water reuse sector we were looking for projects and solutions which deliver innovation, operational efficiencies, and reliability. Despite tough competition from across Europe, the Aquabio submission offered the clearest evidence of these criteria. The case provides an impressive example of pioneering European technology and management.”

Bakkavor is the UK’s leading provider of fresh prepared foods.

Aquabio is part of the Freudenberg Group, a global company based in Germany which operates in 60 countries worldwide.

Water Reuse Europe is the new trade association for the European Water Reuse Sector. It provides a collective identity for European water reuse professionals and a focal point for nurturing innovation and best practice. It represents the European sector’s interests and aspirations and stimulates its growth and competitiveness through various initiatives. It supports its members by facilitating the sharing of knowledge, techniques, research, and experiences as well as by promoting European expertise and solutions in water reuse to global markets. For more information, please visit: www.water-reuse.eu.